PCOD vs PCOS – Are they the same? Many women use both, PCOD- (Poly Cystic Ovarian Disease) and PCOS – (Poly Cystic Ovarian Syndrome) interchangeably when both are very different conditions. While both the conditions are related to the ovaries and both cause hormonal disturbances, there are many significant differences. 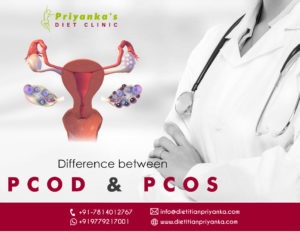 PCOD vs PCOS – How Are They Different?

Those with PCOD can still ovulate regularly. The women who have PCOD may have similar symptoms as PCOS, but they retain the ability to ovulate periodically and thus, can conceive successfully. However, those with PCOS do not ovulate due to a severe hormonal imbalance that disturbs the process of ovulation.

In both cases, i.e., PCOD vs PCOS, losing weight, eating a healthy diet that is free of processed and junk food, and following a regular exercise, the schedule has shown tremendous improvements. It is imperative to catch the disease as soon as possible to control the damage with proper lifestyle changes and medications.

That’s why I have come up with the program for people who are suffering from PCOS.